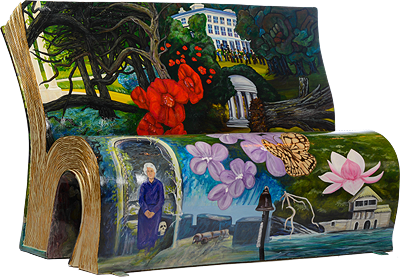 Listed as the best-selling novelist of all time, Agatha Christie is the only mystery author to have created two world-famous detectives: Hercule Poirot and Miss Jane Marple.. The book chosen for this very special BookBench is Hercule Poirot and the Greenshore Folly. In 1954, Agatha Christie wrote this novella with the intention of donating the proceeds to her local church, and she filled the story with references to local places, including her own home of Greenway. But, having completed it, she decided instead to expand the story into a full-length novel, Dead Man's Folly, which was published two years later, and donated a Miss Marple story (Greenshaw's Folly) to the church fund instead. Unseen for 60 years, the novel was finally published to the delight of Agatha Christie fans.

Follow the clues to track down the Agatha Christie BookBench this summer. And don't forget to use the little grey cells, mon ami!

Sponsored by Agatha Christie Estate, this bench will represent the most iconic symbols of British crime fiction.

This BookBench is on the Bloomsbury Trail