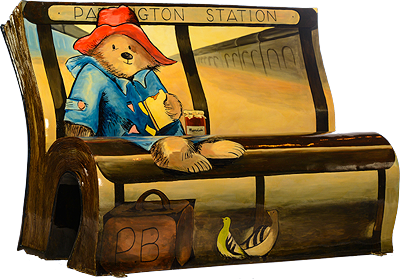 Do you know the story of London’s most iconic bear?

Although Paddington now lives in London, England, he originally came from Darkest Peru where he was brought up by his Aunt Lucy. When Aunt Lucy went to live in the Home for Retired Bears in Lima, she decided to send him to live in England. Eventually, Paddington arrived at Paddington Station in London where he was found by Mr and Mrs Brown. He was sitting on a small suitcase with a label round his neck with the words “Please Look After This Bear. Thank You.” Unable to resist such a simple request, Mr and Mrs Brown took Paddington home to live with them and their two children, Jonathan and Judy and their housekeeper, Mrs Bird. The stories that followed about Paddington Bear and his adventures have delighted children for decades. Join him for a marmalade sandwich on this very special BookBench this summer!