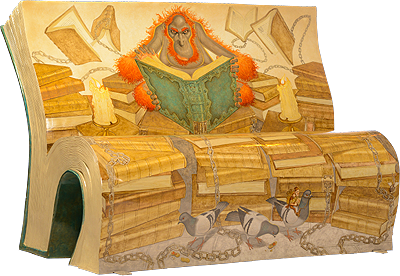 With over 80 million Discworld books in 37 languages, we hope that fans are impressed by our BookBench depicting the Librarian, a character who first appears in the debut novel, The Colour of Magic. The series is named after a flat disc balanced on the backs of four elephants which, in turn, stand on the back of a giant turtle, Great A'Tuin. This is the world in which the Librarian is turned into an orang-utan and chooses to remain so as he realises he prefers it to human form. As a further treat for Discworld fans, this BookBench has been created by Paul Kidby, who has designed the Discworld book covers since 2002.


You could own this bench

Meet the artist behind the Discworld BookBench
Saturday the 23rd August, 2014