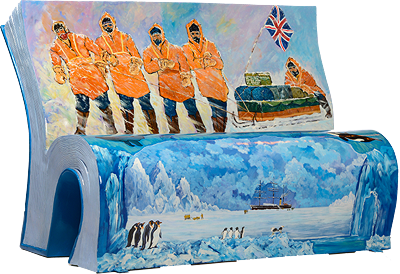 Captain Robert Falcon Scott (6 June 1868 – c. 29 March 1912) was a Royal Navy officer and explorer who led two expeditions to the Antarctic regions: the Discovery Expedition, 1901–04, and the ill-fated Terra Nova Expedition, 1910–13. The Captain Scott BookBench brings to life his diary of the Terra Nova expedition that ultimately claimed his life. Scott's diary has been in print since it was first published in 1913 and has sold almost 250,000 copies. He is remembered as a great explorer, and his account of the expedition shows courage and determination which has inspired readers for over 100 years.

This BookBench is on the Greenwich Trail